I can’t believe that a month has passed since I was at Peaks. The weeks since have flown by as I was kept busy with work, a trip home to Ireland, playing catch up after all my weekends away and finally getting the time and the weather to start into this season’s gardening. Before I move on though I want to share one last highlight from Peaks that I’ve been meaning to share for a few weeks now: Peak’s Sunset.

Peak’s Sunset was made by Peaks Posse for the Modern Quilt Guild ‘s 2018 QuiltCon Charity Challenge and after it’s time at QuiltCon 2018 it returned to visit us at Peaks before we pass it on to the wonderful Siblings Together charity in the UK. This fantastic UK charity helps maintain contact between brothers and sisters who have been separated by care. As part of their work the charity organises holidays and outings for siblings and as a memento of the time shared together they are gifted a quilt.

Peaks Posse are Lynne, Elita, Gina, myself, Clare, Suze and Francine – we are a group of friends who met through the Patchwork in the Peaks quilting retreats. These are organised by the multi-talented Elita (aka Busy Needle Quilting), and take place twice a year in the beautiful French Alps. We’re a truly international bunch, being British, British-Swiss, American and Irish, and are currently based in Switzerland, France, the UK and the US. But, more importantly, we all love modern quilting! We regularly drool over each others’ creations, so we jumped at the chance to ﬁnally work together on a project! 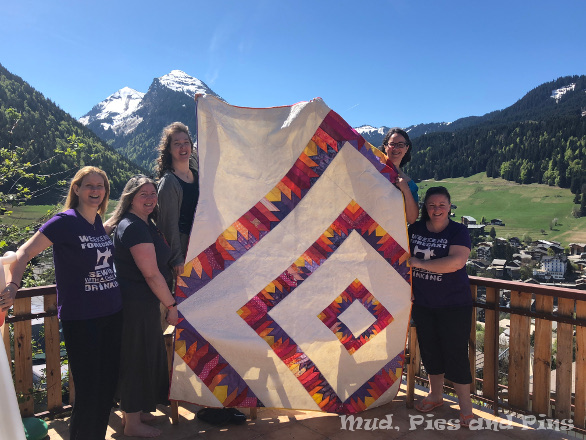 The challenge colours immediately brought to mind the glorious hues of all the sunrises and sunsets we have seen during our various Peaks retreats. The sheer beauty of the sun rising and setting over the French Alps in Morzine has to be seen to be believed, and we wanted to reﬂect that in our team entry. This made our initial inspiration easy – it just had to be a variation of the traditional Delectable Mountain block! Gina, Clare and I worked up some ideas, and we eventually decided on a non-traditional, off-centre placement, with plenty of negative space to allow the blocks to shine. We approached the challenge collaboratively, using a closed Facebook group to share ideas and make decisions. And this quilt was truly a team effort:

The most challenging aspect of this project was deﬁnitely the fact that, during 2017, 3 out of 7 of us moved internationally. Now, moving house is stressful in itself, but moving internationally brings a whole new bunch of challenges! From sewing machines going walkabout, missing power cords and foot pedals, to simply locating which boxes fabric has been packed in. Not to mention the sheer physical distance between us, and the vagaries of international shipping. Suze’s husband had to step into the breach, just before Christmas, while he was on a business trip from the UK to Geneva, making a detour via the post ofﬁce with the last of the blocks to ensure they arrived in time for Clare to piece them into the quilt top! 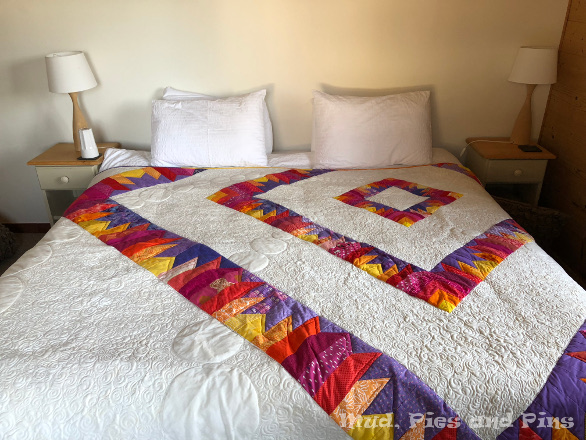 However, despite recent moves, meaning that the physical distance between us has grown, we remain as close as ever and continue to inspire each other, thanks to the wonders of technology and of social media. And, of course, we continue to meet at Patchwork in the Peaks. Maybe we’ll see you there too one day and you too will get to enjoy the magnificent Peak’s sunsets with us! 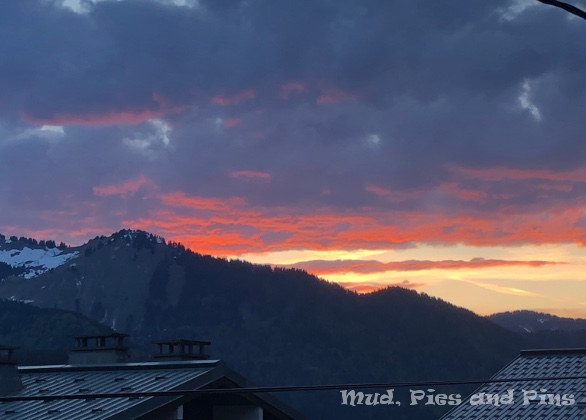