Skip to content
Handcrafts are my thing. There’s always been something. Knitting, crochet, cross stitch, sewing. I even did some embroidery in the past. I flit from one to the other, seasonally knitting (I’m an autumn and winter knitter), cross stitching on the go, and now I’ve been bitten by the sewing bug again. It all restarted when I saw a sewing machine on sale in a local department store. I already have a lovely old machine, my trusty Singer was inherited from my grandmother. It is old but still going strong, has made curtains for my house, my wedding dress, bridesmaids corsets, clothes for me and my son. I love it and I wouldn’t get rid of it but it goes forwards, and backwards and that’s pretty much it. I’ve always wanted something to do a little bit more. So I bought myself a new toy. It too sews forwards and backwards, but it also does zig zag, faggoting, joining, appliqué, quilting, and buttonhole stitches as well as all manner of decorative ones. Will it still be around in 40 or 50 years like my Singer, I very much doubt it, but for now it will do me nicely.
I decided to start out simple and to christen my new machine I designed and made my son a monster. A simple enough idea but it let me try out appliqué (my first attempt ever I might add), buttonholing, sewing on buttons, fitting a zip as well as some basic stitching. I wasn’t disappointed, and neither was the little man. He is now the proud owner of an elephant and cat eating monster. A quick trip to the crafting store later in the week and it will hopefully be joined by an alien. 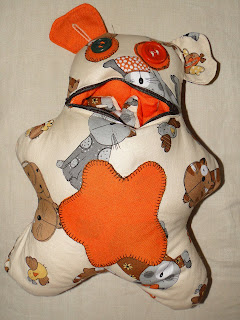 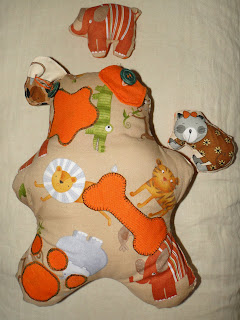 Now that I’ve got the stitching itch a few simple stuffed creatures are just the beginning. I have just designed and started to stitch my very first patchwork quilt. I’m starting off small with one for the little man’s cot. I’m hoping that by the time we conver the cot to a bed for him (which I’m sure will be soon) I’ll have finished. I’ve also started stocking up on fabrics and hve plenty of other quilting projects in mind. No idle fingers for me. 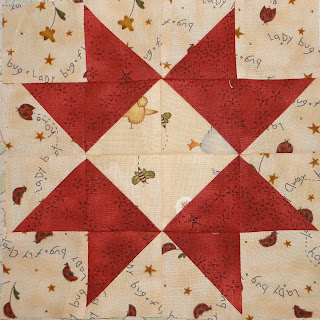 One thought on “A New Addiction”