Friday was glorious. There is no other way to describe it. A clear blue sky, warm, sunny spring day. After our customary trip to the pool myself and the little man decided that the rest of the day should be spent in the garden. The sand box was reopened, the toys brought out and the first al freso lunch ofthe year eaten. I then decided it was time to do a bit of work. Out came the brush and the paths were swept clear. We moved barbeques, swept into the nooks and crannies and then the little man did some bag holding while I diligently shoveled up all our sweepings. Next was the weeding. Time for the beds to get their spring overhaul. So I dug and raked, pulled and gathered and slowly but surely the flower bed appeared. I discovered to my delight that the primroses are beinging to invade en masse and that the Bärlauch I planted a few years ago is finally beginning to spread. Of course the little man was not going to let me weed unaided so in his bid to help he decided that pulling a few flowers from the primrose plants was the order of the day. 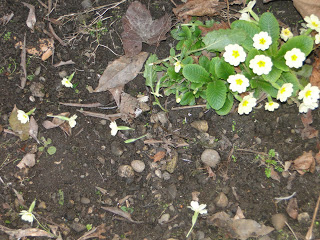 Thankfully only a few flowers sucummed to his helping hands before I sucessfuly distracted him with some gardening tools. He was then happy to rake through some already cleared soil and a subsequent move to the vegetable plot proved to be a popular move where my real little boy soon discovered the joy of crumbling lumps of soil. 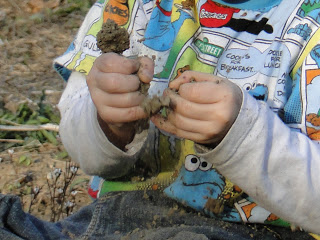