When first I discovered jelly rolls I really wasn’t sure what to do with them. But after a little bit of eperimenting and I was soon churning out all manner of cushions, table mats and wall hangings. I loved the variety of colours and designs but even more so the variety of shapes and pieces I could play with. I cut triangles, wove folded strips, pieced rectangles, mixed collections. 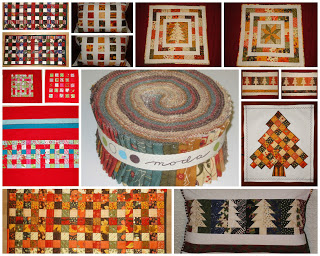 Spurred on by my success with jelly rolly I decided I would purchase a moda scrap bag and see what I could make with that. My first purchase contained fabrics from Kate Spain’s Central Park collection. As soon as I saw the fabrics I knew what I was going to make with them Cori over at Let’s Eat Grandpa had made the most amazing quilt as you go cushion and I really wanted to try out her design. So not only was this going to be my first scrap bag project, it was also going to be my first attempt at some quilt as you go stitching. I followed Cori’s tutorial which explains beautifully how to create these wonderful quilt as you go designs. Despite her comments on how thread intensive this project would be I was still under prepared and had to wind a few extra bobbins as I went. But wind I did, and as I added strip after strip of fabric I saw a rather pleasing desing appear. 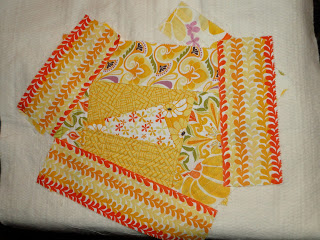 It took a few evenings of sewing but I finally finished off my square. I had hoped I’d get to include a few more of the blue and purple fabrics along the outer edges of the square, but that was not to be. Rather than return them to my sewing press to await another project I joined up some strips of these fabrics to make the binding for my cushion. Backed in orange and yellow I am very pleased with how it turned out. The central patch is perhaps a little larger than I would have liked, the end result not quite as flower-like as I hoped, but it still brings a large smile to my face each time I see it. 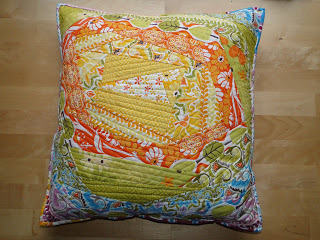