It’s just over a week since I joined in the Easiest Sew Along Ever and I’m really enjoying the experience. There are lots of really wonderful projects on the go – you can find them all over on the Sew Along Flickr page. Despite limited sewing time this week I’ve still managed to make nice progress on my Bug Picnic Quilt.

I’ve decided on a fairly simple design which is essentially a nine patch block. I am going to have a centre piece of woven fabric strips (9×9 1″ strips), surrounded by a mix of nine patch blocks and appliquéd blocks all of which are slowly beginning to take shape. 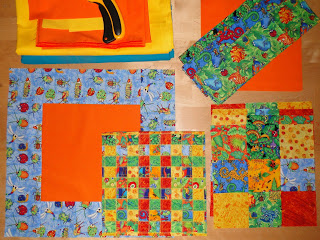 I decided that by keeping the design relatively simple I would have a good chance of getting finished withing the time frame for the sew along, and I would also have time to focus on details such as the appliqués. I decided that these would be scaled up versions of some of the beasties in the border fabrics of the appliqué blocks, and with a little help from my computer was easily able to generate the patterns. 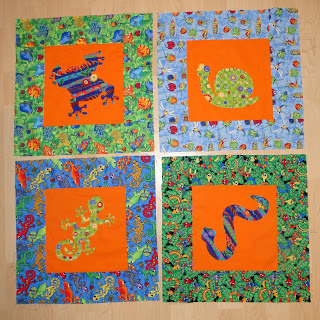 Although I did a little raw edge appliqué on my Shelburne Falls pillows I stuck to simple straight edge stitching on that project. This time I have decided to brave the zig zag. I must admit I was apprehensive about doing so as some of the appliqués have several small details and curves and I seriously considered simply hand quilting outlines of the designs for a while. But as the saying goes “nothing ventured, nothing gained” and so I have made a start and although the end results are far from perfect I am very pleased with them. 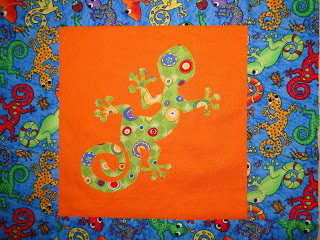 Now all that is left to do if finish the blocks, piece them together, then baste, quilt and bind my quilt and hope that we then get some lovely weather for my boys (or possibly their teddies) to give it an outing.

I’m linking up with Lee’s Work in Progress Wednesday over at Freshly Pieced. Are you?

6 thoughts on “Bugs and Beasties”

It’s hard to believe that it has already been a

Blue skies are back, temperatures are rising and t

It‘s a dull, damp and chilly day so I‘ve retir

Little by little my extra large cushion cover is c

Some parting shots take as we finished up Patchwor

Saturday at Patchworks in the Peaks. I took a sto