Jennifer over at Ellison Lane is currently hosting the Modern Mini Quilt Challenge. For the past week there has been a blog hop where some very talented sewists shared their awesome mini quilts. Now it’s time for the final link up over at Ellison Lane.

I was drawn to the challenge from the off. Most of my quilts to date have been mini quilts in the form of cushions. In the past I had concentrated mainly on getting my piecing right and kept my quilting very simple. This resulted in cushions with, what I felt were, very pelasing designs but with lots of missed oppertunities for practicing my quilting skills. 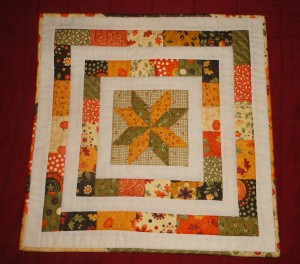 With this challenge I wanted to address that issue and tackle a lot more quilting. I initially thought about entereing my Through Leaded Panes quilt as it met all the criteria. It was a challenge in that it was the first time I worked with strings and the first time I used denser quilting, albeit still quite simple.

However, I felt I could still do better and, after a little playing about on EQ7, I came up with the pattern for what I have callem the Ball Pipe quilt. I’ve been wanting to make something with circles for some time so this was the perfect project to try it on. The overall design is a base of pieced strips with a square “pipe” widening and winding it’s way into the centre of the quilt. 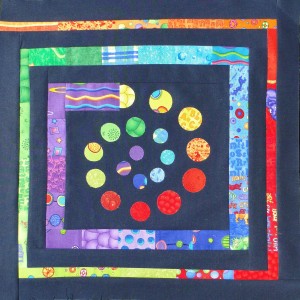 The circles were simply attached with fusible interfacing, and I then let the quilting add some extra reinforcement. I realise that the circle edges will probably lift a little with time but this does not bother me as I feel it will just add another dimension to the quilt. 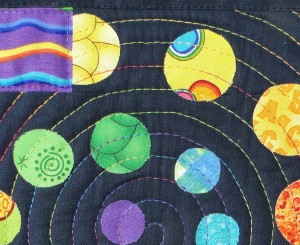 The centre of the quilt is spiral quilted with a variety of King Tut threads. I varied the shade of thread used to match with the circles that I was sewing through moving from purple shades in the centre to yellows at the outer edges. This was my first time to spiral quilt and I really enjoyed it and love the result. 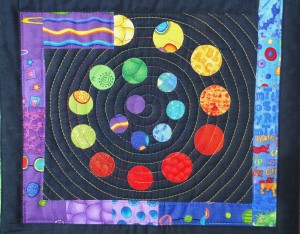 For the pipe section of the quilt I kept the quilting simple as I wanted the main focus to be on the centre of the quilt. I used the same King Tut threads to define the edges of the pipe and a plain dark navy thread on the navy background.

For the back of my cushion I found it very difficult to decided on a fabric that I liked so I opted instead to make another quilted panel. I echoed the centre of the front with a large quilted spiral of balls, this time on a red background. I used the same spiral quilting and framed the panel in the same navy fabric I had used in the main mini quilt. Because I wanted to bind the edges of the cushion I inserted a zip into one of the seams between the red and navy. This was my first attempt at inserting an invisible zip and I am more than pleased with the results. 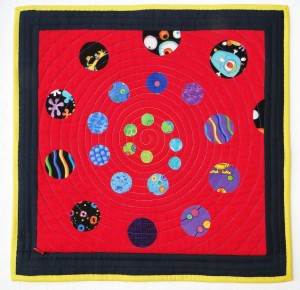 The whole cushion is bound in yellow. This was the one colour that was missing from my pipe on the front so I chose the yellow so it would appear that the binding was feeding into the pipe which then went on to spill out the balls at the center. I really love the extra pop of colour that it gives. 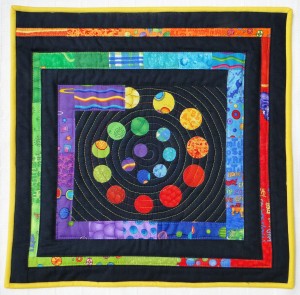 I have learned so much from making this mini quilt. For one thing, I now know that I love spiral quilting and I’m already planning a larger project where I can try out using more than just a single spiral. 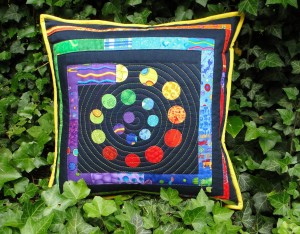