During the month of June Alyce over at Blossom Heart Quilts is hosting her Kate Spain blog hop. It started with an interview with Kate Spain, which was then followed by a series of great posts as part of the blog hop. Now it’s time for followers to join in by linking up of our favourite past creations featuring Kate Spain fabrics.

Given that I’ve not been sewing creatively for very long I haven’t had a chance to use many of my Kate Spain fabrics yet but I can link up my Central Park in Bloom cushion that I made earlier this year. 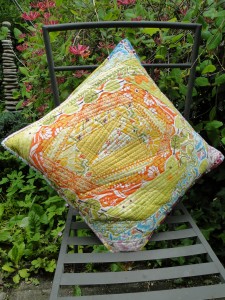 I used several strips from a scrap bag of Central Park fabrics to make this cushion. Inspiration for the design came from Cori over at Let’s Eat Grandpa who had made a really beautiful quilt as you go cushion. I had hoped that mine would turn out a little more bloom-like in appearance but even though it is slightly lopsided I am still more than happy with the end result, especially as it was my first attempt at this QAYG method of design. 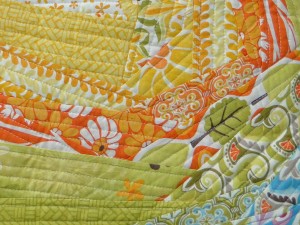 The cusion features mainly yellow, orange and green fabrics, with blues and purples just making an appearance at the edges of the bloom and in the binding. I’ve been lucky to recently pick up some more fabrics from this range so I’m hoping to rework a new version or verisons of this cusion in the not so distant future now that I am more practiced at working the bloom shape. 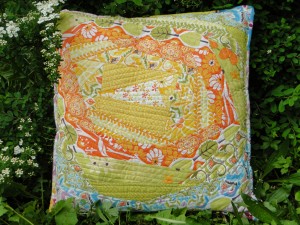 Now that I’ve told you all about my cushion why not pop over to Blossom Heart Quilts and have a look at all the other wonderful projects that have been linked up.

3 thoughts on “Central Park in Bloom”