I’ve been following the Kate Spain blog hop, hosted by Alyce over at Blossom Heart Quilts during the month of June. As a finale to the blog hop Alyce is hosting a link up of all of the projects created with Kate Spain fabrics during the blog hop. 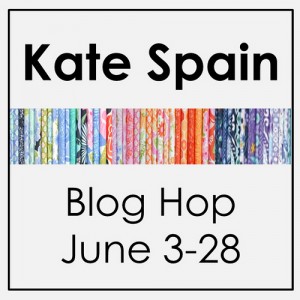 Early in June I decided that I was going to make something with remnants of the Good Fortune line that I had. My initial idea was to take some stings and form them into a mini quilt. The strings were transformed into some HSTs and then after some playing aroud with layouts I found myself leaning towards chevrons and pinwheels. There then followed some paper piecing and I soon knew I was going to make something more than the originally planned mini quilt. 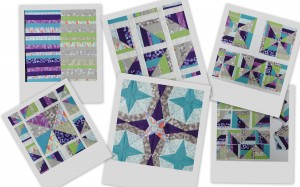 And so I decided I was going to make a pillow cover, a body pillow cover to be exact. When I was pregnant with my youngest son I bought a body pillow to help me sleep at night. Now it is my reading pillow. I love to bring it into the garden on lazy afternoons and relax with a good read while keeping a good eye on my two boys. Before this the pillow has just had the plain white cover that I bought with it. Now all that is changed and it is sporting a beautiful new cover that I have fortunately finished just in time to link up. I feel I should point out at this stage that because of my last minute finish I wasn’t too lucky with oppertunitites for photographing my finished work. I ended up with the dullest and dampest of days, when it is unfortunately much too grey to phototgraph indoors. As a result myself and my pillow have braved the damp outdoors to get what photos we could, along with the odd raindrop stain. 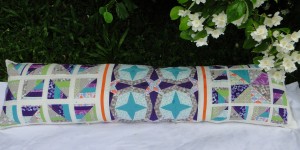 I used the chevron, 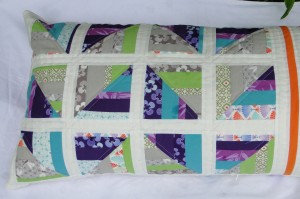 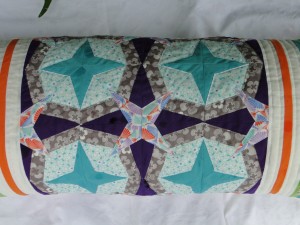 panels to create the front of the pillow, with little stripes of orange to seperate them. My original plan was to just back the pillow in the same off white cotton I had used in the front of the pillow. However, I had one large pinwheel left over from the pinwheel section and so I decided I would put that to use and form the back around it. I started off with a simple framed pinwheel 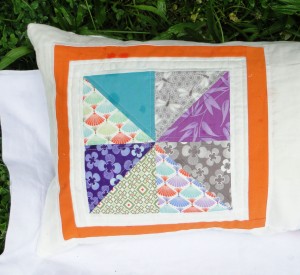 As I pretty much had one panel ready for the back at that stage I decided I may as well go on and create a couple more and make the back as interesting as the front. Some slash and sew and a scrappy pieced string of Good Fortune resulted in the seond panel 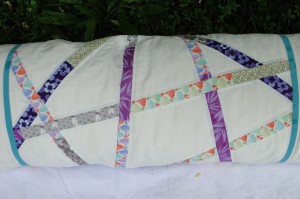 and following with the roughly geometric theme that I seemed to have ended up with at that stage I went with circles and spirals for the final panel. 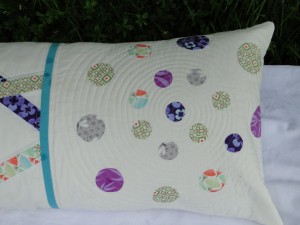 This time I used turquoise sashing to seperate the panels and I was more than pleased with the overall result.

Of course no good reading pillow would be good without something to read and for that I have my kindle. Following my success at making a cover for my husband’s kindle I decided I would make one for mine too and what better to use than some of the scraps I had left over form my pillow project. After a little designing on the computer I came up with a paper pieced flower design that I decided I would used for the front of the cover. I echo quilted the flower to finish off the front. 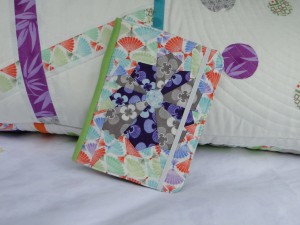 For the back I chose the grey dragonfly print and simply quilted it with parallel lines. The plain green spine joins the front and back panels and allows for the cover to be easily folded as it seperates the bulk of batting, flannel and thin plastic that are present in the cores of both the front and rear covers. 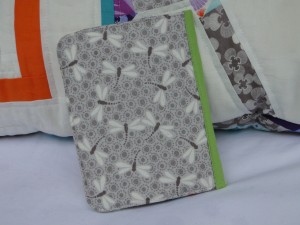 The kindle itself fits sungly in it’s new cover, but is still easily accessed and used. 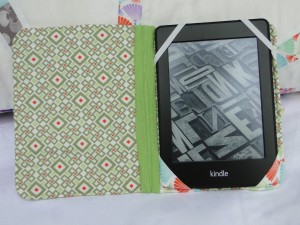 Now all that I need is a lazy and dry afternoon so that I can really enjoy my new pillow!