When it comes to quilt design the inspiration comes from all manner of places. For one mini quilt I made lately it was an image I spied online that first inspired me. For some reason, now long forgotten, I was reading about St. Mark’s Bascillia in Venice and spotted some images of floor mosaics that I immediately thought would work wonderfully as EPP designs. One of the designs in particular really jumped out at me. Attributed to Paolo Uccello (1397-1475), it features a starred dodecahedron in a central circle. My first thought was to try making this with some Stonhenge fabrics as many have a gorgeous marble design to then. As chance would have it around the same time I saw a notice for the Northcott Artisan Spirit Sandscapes Challenge and as soon as I saw the Sandscapes fabrics I just knew that they would work beautifully in the design I wanted to make. Inspiration, a challenge and a deadline to work to, I didn’t need any other incentives to get working. 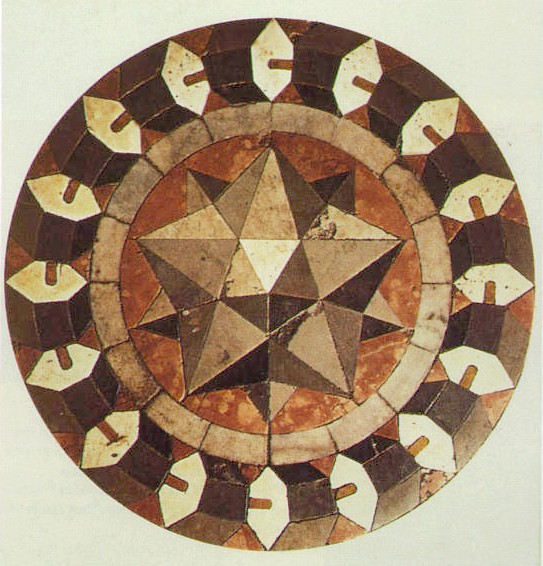 The first step was, of course, the design. I love to work in Inkscape when playing around with geometric quilt designs and after a little work it wasn’t long before I had a pattern completed and ready to work with. 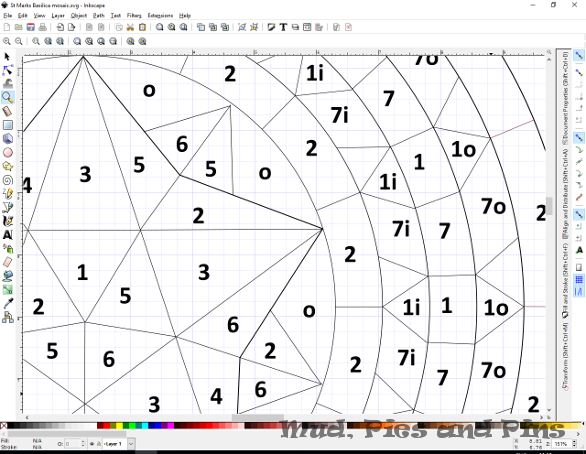 I decided I would use the Sunset-Coral colourway of the sandscapes fabrics for the wall-hanging. The colours and designs of the fabrics reminded me of a variety of woods and have such beautiful rich and vibrant colours. By colouring in a smaller version of the pattern I had drawn I was able to assess how the various fabrics in the line would best work in the design. 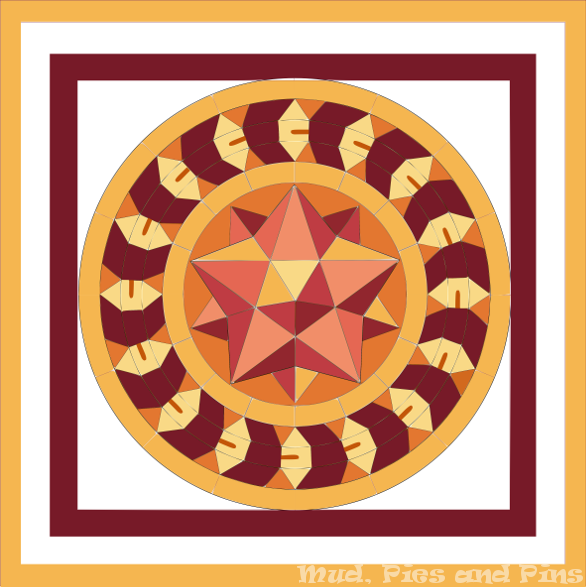 After that it was time to cut out papers and fabric and simply start sewing. I started with the central polyhedron which came together quickly and easily. 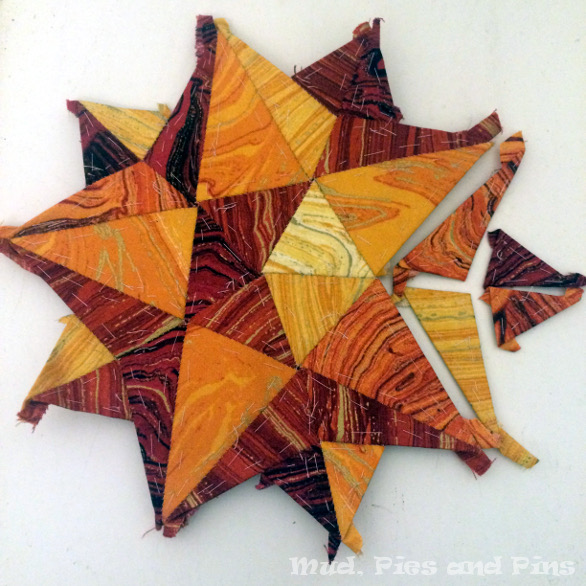 As I completed each step/round of the quilt I found myself reassessing the colour choices I had made for the next step/round to be sure that the choices worked as I originally intended them to. 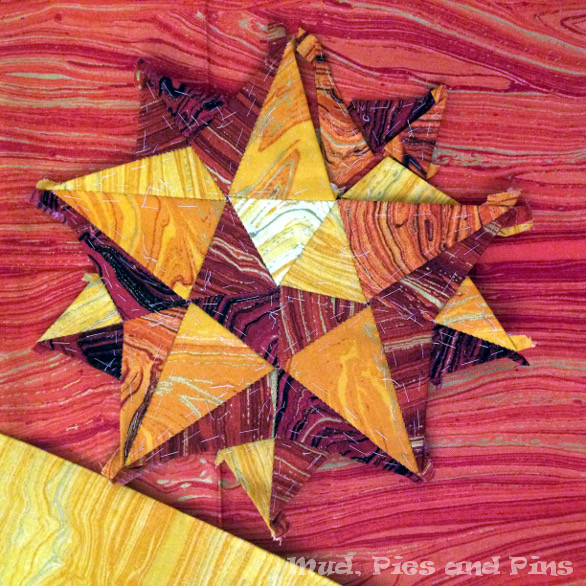 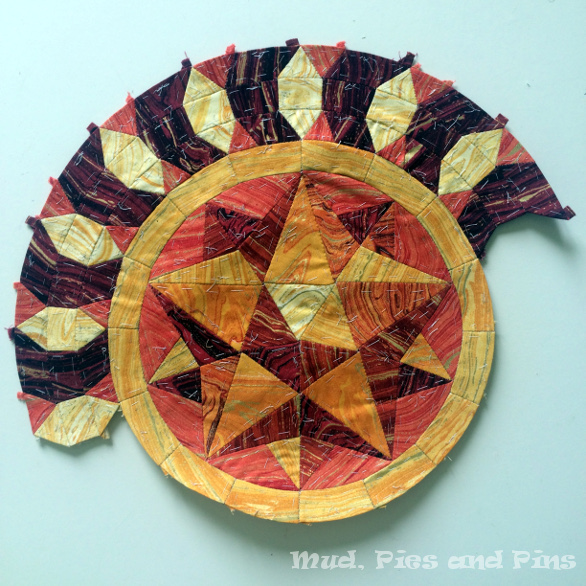 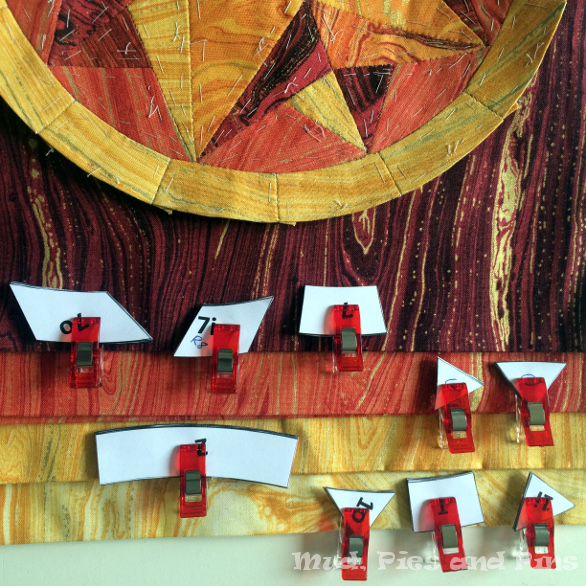 For the most part most of the choices stayed as I had planned them, with the exception of one the skinny square outer borders which had to change when I decided that the deep wine fabric was the best choice for the overall background.

One thing I did discover as I pieced the central sections was that even with all of the labelling I had pre-printed onto my initial paper pieces, I still had to add notes to several of them to avoid confusion with regard to their placement. 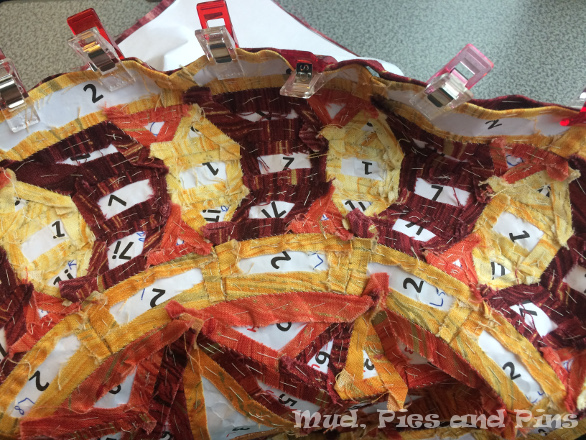 Once all of the circular rounds had been completed I added a final “round” of background fabric to square off the design. 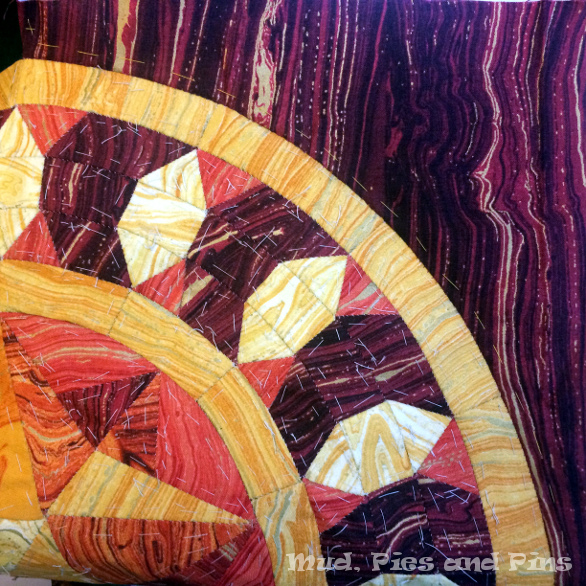 Up to this point the wall hanging had been completely hand pieced but I moved to machine piecing for the final few borders as I felt more confident doing so for the long straight seams.

Once the top was quilted I moved on to the quilting. I used Quilter’s Dream wool batting, as I want plenty of loft to add dimension to the finished wallhanging. The central sections and borders were all quilted with stitch in the ditch quilting using Aurifil Brillo Dark Yellow #739 which picked up the gold veins running through the Sandscapes fabric wonderfully and added a little extra bling and sparkle to the finish. For the background sections I initially considered continuing with the Brillo thread and quilting some scroll work to imitate the original mosaic design, but I reckoned that would detract from and clash with the design in the fabric too much. As a result I decided to simply follow the grain lines in the fabric pattern to add dimension to those sections and enhance the fabric design. I used 50wt dark carmine red Aurifil in  #2460 and it worked beautifully to give the texture and result I had hoped for. The same thread was also used to add some satin stitch / dense zig zag quilting in the outer polyhedron ring so that the blocks would appear threaded on a ring, as per the original mosaic.

Bound in yellow to echo the inner borders the wall-hanging finished up at 24″ square. I decided to name it “Mosaic Marquetry” in reference to both its origin and the fact that the finished appearance looks like that of a marquetry table top.

And what about the challenge I hear you ask. Well with a final push I did manage to get the quilt finished just in time to enter and I sent off a photo of it not long before the deadline. A few days later I was delighted to hear that I had made it into the top ten and then I had to send my little quilt off on its travels to be judged. It made its way safely to the US and a couple of weeks later I heard the amazing news that my wall-hanging had placed third in the pieced category. I was beyond thrilled when I heard the news and a couple of weeks on am still celebrating. From start to finish making this quilted wallhanging and participating in the challenge has been a fun and exciting experience and I look forward to finding more challenges to inspire me in the future.

A huge thank you to Northcott for hosting such a fun challenge. It definitely inspired me to try something new and pushed me out of my comfort zone both in terms of designing and in having the faith in myself and my work to actually enter it in their challenge. Be sure to check out the other winners of the challenge, they have all made such beautiful pieces.